When a Pussy Attacks

If you landed on my blog through a Google search expecting vaginas you should be ashamed of yourself. This blog post is not about the pussies you wanted to see. Also, there is just one photo of a pussy in this blog post and it is the one you see below. But I digress...

My husband and I share our house with three pussies. They are furry, sometimes cuddly but beneath their angelic and sweat demeanor there lurks a malevolent darkside. A darkside so iniquitous and vicious it’s best strangers approach our kitties with the utmost caution or face the dreadful consequence – being mauled! You see our furry critters are emotional unstable and dangerous little souls and every now and again their tempers and tantrums take me by surprise and I am left wondering, why do I share my house killers. 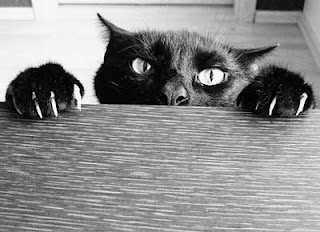 Our most notorious cat of the three is aptly named Killer Pussy. She is a savagely cruel killer. Remorseless, villainous and diabolical she saunters through our estate seeking out her victims. She has no particular preference, if it has a heartbeat she will kill it. She will also eat anything she can lay her little paws. Sometimes it is disgusting as we often find dismembered body parts strewn throughout our house. She leaves this as warnings to us not to fuck with her. It's a not so subtle threat really.

Her absolute favorite snack, apart from freshly killed meat, is a vitamin and catnip enrich cat treat which she gets every afternoon. I think she likes it because the catnip gets her high. She does have a bit of a drug problem but refuse to go to AA. So when the treats got finished, a couple of weeks ago, and the shops ran out of stock our little pussy was not amused! This sparked a tantrum as only a cat can do. All you cat owners out there can probably relate.

Killer Pussy was clearly going through catnip withdrawals and clearly needed to go to rehab but we could not afford it. Also, there are no catnip rehab facilities anywhere in the world which is a travesty.  Getting back to the point, Killer Pussy ignored us, she would sit in the corner of the bedroom sulking, scratch us when we picked her up and when her passive aggression failed to yield the desired result she went to Plan B – breaking stuff. Two broken plates, a torn curtain and a punctured pool lillo later, the shops eventually acquired her favorite treat just in the nick of time, as I suspect Plan C would have involved murder by suffocation followed by her eating our faces.

Killer Pussy's favorite activities, apart from sleeping, are plotting and scheming about how to break into our pantry (the food room as she calls it), furthering her nuclear ambitions, continuing her ill-suited affair with Kim Yong Un and setting her plan for world domination into motion. (If you failed to follow the last few sentences I don't blame you. For it to make sense you really should like her fan page. She is kinda famous on Facebook and Twitter. Just saying.)

Fur Monster was one of our oldest cats and she didn't like strangers and despised children (little humans). The fact that she was barren for so long and struggled to have kittens of her own may have something to do with her hatred of offspring. Whenever we receive visitors we always had to warn the guests of her violent disposition. Many children have been emotionally and physically scarred by her and many adults have too, with my late mom included.

A few years ago Fur Monster’s sister had kittens and my mom and her housekeeper wanted to see the litter/kindle. They went into my garden cottage while I was out. They didn’t make it past the kitchen. Fur Monster and her sister Sly Monster cornered them and held them hostage, literally, in my kitchen for well over an hour. Eventually I received a hysterical call from my mom saying “Your cats have attacked me! I’m in your kitchen! Can’t. Get. Out!!! Oh dear God have mercy!!! H E L P MEEE!!!” and in the background I could hear the housekeeper praying "Jesus, Mary and Joseph" and the cats hissing and growling. Careful hostage negations followed and both my mom and the housekeeper were released bruised, bleeding, traumatized and forever fearful. Fur Monster passed away two years ago and her ashes are kept in my study along with that of her sister - Sly Monster. I am now a collector of cat ashes as a true cat "lady" should be.


Cute Monster is the middle child and the fruit of Fur Monster’s loins. She’s a few sandwiches short of a picnic and the only thing she does well is eat, fart and sleep. She has never mastered the art of tree climbing and is still trying to learn how to play but without any notable success or improvement. The one skill she recently acquired is the much envied skill of paw-to-paw combat.

Seeing as she doesn’t know how to play nicely she settled for second best – fighting. She picks fights with her mother, her aunt and her adopted sister and she usually loses. Did I mention she isn't that bright? Every other day all hell would breaks loose in our house and it’s a cacophony of hissing, growling, screaming with fur and pot plants flying everywhere. Breaking up a pussy orgy of violence is near impossible and after two prior attempts and some loss of blood later, hubby and I decided to leave them to sort out their own shit. If it involves violence so be it! Most things can be resolved with some gratuitous violence anyway. Just look at America liberating countries through war. So why should our cats be any different.

Apart from eating and shitting in the garden the only thing our pussies enjoy doing together, as a family, is kill things. This is where our youngest comes in Lover Pussy.  And as his name suggests he is a gentle soul and is more a lover than a fighter.  However, he loves hunting and he's fiercely good at it.  He also usually leads the family hunt.  Like a ruthless pride of lions (which I swear they think they are) they stalk their prey on the African plains that is our garden. Many a bird, lizard, moth, butterfly and lady bird family have been broken up at the claws of our feline predators. So when a flock of weaver birds decided our leopard tree was the perfect spot for them to raise their families their fate was sealed unbeknownst to them and the bodies started to piled up!


Last Saturday we experienced the worst massacre since bloodshed Wednesday of 8 May 2007. It started at roughly noon. I heard a commotion in our back garden and didn’t pay it much attention until the commotion made its way to under the dining room table. Killer Pussy caught a juvenile weaver bird and was busy interrogating and torturing the poor thing North Korea Style, while the other two Monsters were watching. I tried to save the bird but Killer Pussy would have none of that and ran outside. We intercepted at the pool and I tried to pry the screaming bird from her fangs but she refused to loosen her grip and punctured two of my fingers.  I considered getting a tetanus shot but then realized the hospital would asked too many uncomfortable questions so I took my chances.

As I realized that the soon to be dead bird was doomed anyway and feeling like a horrible human being I let the murder continue. In the lounge I was close to tears as I heard the bird's screams become fainter as the minutes passed. The bird’s parents, family and neighbors all tried to save its life, but one-by-one they too were killed. At sunset the screaming stopped and our backyard was a scene of utter horror and devastation. There are now only four weaver birds and eight eerily empty nests left. Every day and every night our monsters patrol the leopard tree and soon the surviving weaver birds will be no more. They will be murdered in cold blood and we would have to watch and listen. Clarice have the lambs stop screaming?

Sharing our home with temper tantrum prone killers, admittedly is not always fun. Especially when you need to clean up their crime scenes. But even though I sometimes pitch up for work with arms, legs and hands looking like I shoved them into the blender, I love my little monsters dearly and can’t imagine my life without them. Our backyard may be littered with the skeletal remains of countless avian victims, the bird population on the plains of Africa may be living in fear but my pussies are a delight to have and one day, maybe just one day, the birds will stop screaming.