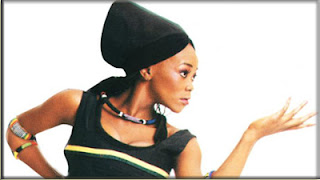 Born the youngest of 9 children in Langa, Cape Town, Ous Brenda's father died when she was 2 and she started singing for tourists to earn money and by the age of 5 she had her first band called the ‘Tiny Tots’.  At 16 she left for Soweto to seek her fortune and her break came when she was signed to fill in when one of the singers in the band ‘Joy’ went on maternity leave.

After her contract expired she formed ‘Brenda and the Big Dudes’ and their breakout hit single ‘Weekend Special’ became the fastest selling record at the time.  Affectionately known as Ma Brrr by her fans, the pint sized singer was known for her outrageous antics and anti-establishment attitude and kept us all highly entertained with the stories that would hit the tabloids of the drama in her personal life, most notably her drug and alcohol abuse and her bisexuality.  The unofficial voice of the townships, her songs often resonated with the sadness and despair found there.  She had a son in 1989 by a fellow Big Dudes musician and had a short lived marriage in 1989, divorcing in 1991.  Around this time she became addicted to cocaine and in 1995 she was discovered in a hotel room with the body of her lesbian lover who had overdosed.  She went to rehab and got her career back on track, with Time magazine publishing an article about her in 2001, citing her as the Madonna of the Townships.  She still had drug problems and returned to rehab about 30 times or so.  On 26 April 2004 she was rushed to hospital for what the press was told was a massive asthma attack that caused cardiac arrest and although doctors resuscitated her she slipped into a coma.  Fans held vigil outside the hospital for 2 weeks until she died on 9 May.  At her autopsy it came to light that it was a drug overdose that caused her cardiac arrest and it was believed that the crack cocaine she smoked that night was laced with rat poison.  Her son Bongani sang ‘I’m So Sorry’ on the soundtrack to the Academy Award winning movie ‘Tsotsi’ and dedicated it to his mother.  During her lifetime Brenda recorded many award winning albums and also contributed to albums released by Mandoza, Miriam Makeba and Harry Belafonte.

Not having a clue what her favourite tipple was I asked a friend who said I should Google something called a ‘Soweto Toilet’ so I did.  And here it is... I certainly hope it tastes more appetising than it sounds! 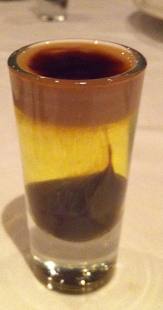 1 tot Banana Liqueur
2/3 tot Amarula
1/3 tot Crème de Cacao
Pour the banana liqueur into the bottom of a shot glass then using the back of a bar spoon, slowly pour the Amarula so that it floats on top.  Before serving, slowly drip the Crème de Cacao into the shooter so that it will create a messy streak as it sinks.  Bailey’s can also be substituted for the Amarula.

The thought of that being the only drink I post this month is a bit sad, so I've made up something called a ‘Weekend Special’ that must be from very distant memories when I was a kid and dragged to Fiesta Land (common as fuck place in the North West province) every weekend to watch whichever musician groupie mother was dating at the time perform.

WEEKEND SPECIAL
2 tots or more of the cheapest brandy you can get your hands on
Appletiser
Grandpa powders or aspirin
Mix the brandy and Appletiser in a tall glass over ice and enjoy.  The grandpa powders are for the next morning, preferably with a fry-up breakfast and some Lucozade to prevent you dying from a hangover.

Ok.  Enough fooling around.  Like Ma Brrr, few things embody the Spirit of Africa like Amarula, so here’s a juicy recipe I think she would have loved. 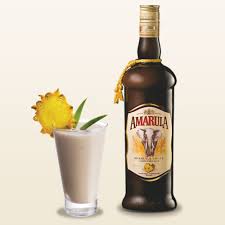 2 tots Amarula
1 tot white rum
3 tots pineapple juice
1 tot coconut cream
Blend ingredients in a cocktail shaker and pour into a tall glass over crushed ice.  Garnish with a slice of pineapple and an umbrella if you’re feeling fancy.

Posted by GeeGee Curtained at 11:35