Why we are dying.

I have been known to sometimes overreact when it comes to my health. Hell, I even once went to the emergency room thinking I was having a heart attack which turned out to only be indigestion. I have also mistaken the common cold for Ebola, Bird and Swine flu. There is a word for that and the word is hypochondria. I think it runs in our family. However, in our family there is one hypochondriac who is worse than I am - my sister. 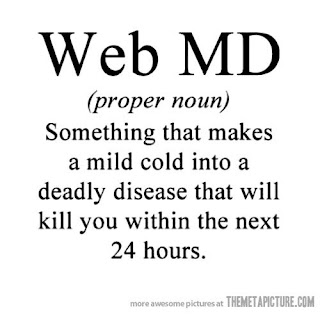 My sister and I can be quite dramatic. And with dramatic I mean we can drive our husbands nuts. Look, we are not easy to live with as we probably have a defective gene that prevents us from conforming to boring social norms. Sometimes we do not act or view the world as normal people do because then life would be boring and accomplishing shit would be relatively meaningless. However, there is one area in which our eccentricity is more prevalent than others and that is our physical well being.

Both my sister and I are very familiar with Google and WebMD. The combination of which, without consulting a real doctor, are dangerous when used by us. You see both of us can easily convince ourselves that we are dying: Any ache or pain could be cancer, a headache could be a brain tumor and each cough could be a new lethal strain of the flu. And most times our worst fears are confirmed by a Google search or by WebMD because they are assholes like that.

You see Google can be very sardonic in the way it toys with one's emotions. It doesn't care if you are in the throws of a full blown panic attack about some kind of imagined disease. It doesn't cushion you when giving you bad news. It just throws it out there in its search results without giving you the contact details of the nearest hospice or psychotherapist in your area. You are diagnosed with a dreaded disease and how you take it is entirely up to you. This is not conducive to a proper and a stable state of your mental health. Also, frugality when it comes to your health is then also out of the window because when it come to your health money should not be an object.

Most recently my sister had to go for blood test. Several things were tested and in a very badly thought out move her doctor sent the test results to my hypochondriac sister. My sister went through the blood test results with a fine-tooth-comb. You can almost say she did so obsessively. Then she went on to Google and immediately had a full blown meltdown. So naturally she phoned me with the horrific news.

"I have cancer" she said in a muttered tone when I answered the phone. "I looked over my blood test results and I definitely have fucking cancer". She then went on to discuss her test results in medical jargon in which Google confirmed that she has liver cancer. Bordering on hysteria she was rambling on about other disorders her blood test results had also uncovered and we were convinced that she only had weeks to live.

After discussing her cancer and three other semi-fatal conditions she now has, I asked her what her doctor said. She then told me that she hasn't spoken to her doctor probably because her doctor did not know how to break the bad news to her. We both thought that was very unprofessional of her. It also goes against some kind of code or oath that she is not adhering to. After discussing her funeral arrangements my sister sent her doctor an email to call her urgently. If the doctor was too afraid to call her, my sister would force her.

Later that afternoon her doctor phoned and shocked my sister with the results of her blood tests. Everything was normal. She did not have cancer or any other fatal syndromes. All the results were normal for the medication she was taking. Obviously relieved she phoned me back and told me that she was no longer dying but that it was a really close call. My sister is going for a colonoscopy next week to make sure she doesn't have ass cancer. Luckily she will be asleep during the entire procedure or she would bombard the doctor performing the procedure with a lot of questions. Mostly about the cancer she is seeing on the screen that turns out to be shit.

Hypochondria is not a condition I wish on anybody. Thinking you are dying at least three times a year is exhausting. Having Google and WebMD toying with your emotions is even worse. But on the bright side, should either my sister or I ever contract a serious disease it will be diagnosed early. We are very in tune with our bodies that way. Well most times anyway.
Posted by Unknown at 13:20