When things start to sag

Growing older sucks.  And not in a good way.  Throw in early onset male menopause and you have the odds stacked so against you that I now totally get why Meryl Streep drank that potion in Death Becomes Her.  Only in real life there are no magic potions only hormones, exercise and diets.  All of which I loathe because hormones require needles, exercise make you sweat and diets are just a “socially acceptable” way of starving yourself.  You know, because anorexia and bulimia are “mental disorders”. 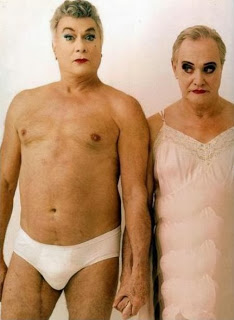 Having gained 7kg (15.4 pounds) in just over three months I can honestly say being fat isn’t fun.  I know that I have been joking that our pregnancy is the reason I have put on a few, as I am "with child" so to speak, but in all honesty most women I know do not gain that much weight during pregnancy.  So why did I gain all this weight in such a short period of time?  Well, according to my doctor (not the one that lives in the Internet who communicates with me through WebMD) it is male menopause and being in my thirties.  I almost killed him, but I didn’t because even though I am chubby I’m still too pretty for jail.  Do you even know what they will do to a pretty boy like me in there?

The final straw that broke the camel’s back happened last week Thursday.  Picture it.  It’s 6:30am at our gay petting zoo, the animals have been fed, I have brushed my teeth, shaved, applied my plethora of age defying creams, done my hair and got ready to get dressed.  I took out an outfit that I wanted to wear, put on my shirt and then tried to put on the pair of pants.  But it didn’t fit.  Then I pick another pair of pants.  That one was also too small.  I made a third attempt, this time I tried to suck everything in and almost popped a vein in my head in the process, but to no avail.  Then I started to panic.


You see, the larger size pants that I recently bought was in the washing and I only had two more pairs of pants left as options for work.  If these two didn’t fit I would be totally screwed!  I have never prayed when I was dressing myself but this day I did.  But my prayers went unanswered.  After I tried on all five pairs of pants I found myself sitting in the middle of a pile of rejection, in the form of pants, sobbing like an emotionally disturbed child.  I looked at my fat and screamed “Why do you hate me?” as if my fat would be able to answer me back.  Anyone who has ever been in that kind of situation will tell you that at that moment you cannot think rationally.  I also almost called in fat for work that day.  But I don’t think that is actually a thing, but it totally should be.   Needless to say I didn’t try it.

Luckily hubby saved the day.  I had forgotten that I bought another pair of pants that I have never worn because hubby hadn’t gotten around to hemming it yet.  So he promptly did and I was able to go to work, albeit it emotionally bruised and feeling rather defeated.  Later that day I spoke to hubby on the phone and he suggested that I go and see my doctor.  Which I did.  While in his consulting room I told him about my unexplained weight gain, that I did not eat more than usual and that he needed to help me.  Then he asked me when last I got a testosterone shot and I then remembered that it was more than seven months ago.  And apparently that was the problem.


Also, apparently those little tropical holidays I have been experiencing again the last three months were hot flashes.  The injection I had seven months ago only works for four months and the last three months my hormone levels took a nose dive again.  Now I am on a testosterone injection once every two weeks until my levels stabilize.  The doctor said that due to the lower testosterone levels I was gaining weight and once the levels are back to normal I will find it easy to lose the extra weight.  But being thirty something I should also remember that my body’s metabolism slows down and that is part of ageing and there is no pill or injection OR magic potion for that.

Look, I do know that we all are going to grow older and that our bodies will change as we do but that doesn’t mean I have to like it.  The fact that I have also noticed that certain parts of my body are on the verge of sagging freaks me out and I will definitely have a few things lifted, nipped and tucked down the line.  I started with Botox when I turned 30 and luckily due to this I have no frown lines, wrinkles or crow’s feet.  However, from the neck down that is a totally different story that I like to refer to as “Ground Zero”.  It’s like a natural disaster but only it involves fat and cellulite; the kind of fat and cellulite that you will eventually have to get sucked out of your body because they are stubborn motherfuckers


Growing older isn’t any fun.  There comes I time that you have to accept that the twenty something body you once had is gone forever.  The days that you could do fifty sit-ups and have a six pack has passed.  The days that you could lose weight just by fucking breathing is now a distant memory.  Many people I know embrace the process of ageing; they don’t mind gravity sucking their boobs and asses to the ground, the odd wrinkles, grey hair and the cellulite.  They accept it as the natural order of things.  But I don’t.  If we were meant to age gracefully there wouldn’t be things like facelifts, body lifts, tummy tucks, liposuction and Botox to mention but a few.  I’m not saying that I will do all these things or advocating that you do.  All I am saying is that I will try and defy the process of ageing for as long as I can afford it.  And as for my early onset male menopause, I have only one thing to say about and to it is and that is fuck you!

Till next time.
Posted by Bitter Bitches at 13:34