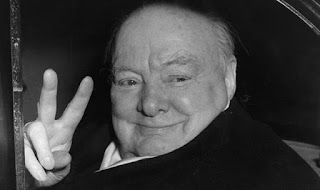 Since it's hubby's birthday this weekend I'm inviting one of his favourite historical people to our fantasy cocktail party in the sky. The man who kicked Germany’s ass with a hip flask in his pocket - Winston Churchill. Winston Leonard Churchill-Spencer was born into the aristocratic family of the Dukes of Marlborough and his mother was an American socialite. Winston’s parents did what most aristocrats did in those days – they left the business of raising their son to a nanny he called ‘Old Woom’. Rebellious and independent by nature he was a difficult student and the first book his governess managed to get him to finish was called ‘Reading Without Tears’. He had a very poor academic record and was often punished which just goes to show how independent thinking can get one into trouble and he is the poster child for showing that a bad academic record does not necessarily mean failure later in life. 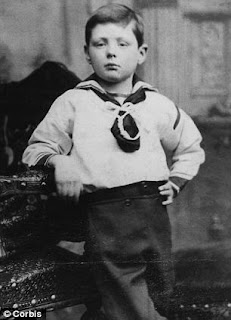 When Winston Churchill’s father died aged 45 he left Winston with the conviction that he would die young too and he’d better get on with making his mark on the world early in life. He started his career by applying to the Royal Military College in Sandhurst, failing the entrance exam 3 times even though he applied to join the cavalry rather than the infantry which was expected of him, simply because the grade expectations were lower and it did not require maths, which he disliked intensely.  The annual income, even combined with his allowance from the family trust, was far too little for a man of his extravagant tastes so he turned his attentions to becoming a war correspondent and soon he was making quite a significant amount of money on the side. Born with a speech impediment that some say was a severe stutter but in truth was only a lisp, Churchill had special dentures made to help his speech once he became a public figure. We all know who he was so I’m not going to bore anyone – or myself – writing about his political career and so on, if you really are interested in all that I have one word: Google. At age 90, 9 days after suffering a severe stroke he died on 24 January 1965, 70 years to the day after his father’s death.  He more than lived up to his own expectations of leaving his mark on the world.  Historian, Nobel Prize winner, Artist, Prime Minister, Writer, amateur bricklayer, butterfly breeder and the first person to become an Honorary Citizen of the United States, he lived life on his own terms and will forever be remembered for refusing to surrender. 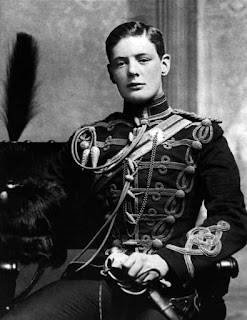 Winston always liked to take a drink and legend has it that he suggested to his Colonel that he should see more of the war and asked to be sent to the front lines in World War 1 because battalion headquarters was dry and he didn’t have much taste for the tea and condensmilk they drank, but alcohol was permitted in the trenches.  That never changed – toward the end of his life he was once asked by an MP at a formal event if he would like a cup of tea, to which he infamously replied, ‘Don’t be a bloody fool, I want a large glass of whiskey.’  Guess it’s pretty obvious what his tipple of choice was.  He always preferred it neat but I looked for a few refreshing cocktails that could be delish in this hot weather we’re having. 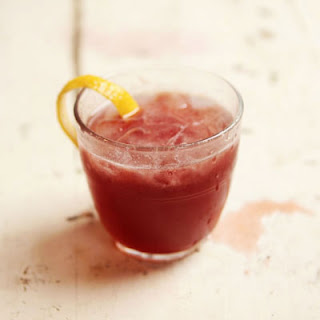 The grown up version of a Shirley Temple this makes me thirsty just looking at the ingredients. 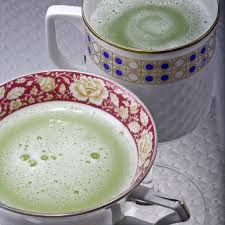 Since Winston had expensive taste and also seeing as my Gentledyke likes to have ‘tea parties’ with fancy cups filled with Jack Daniels and Coke I thought this recipe was quite fitting.

3 tots Glenfiddich 21 year old Single Malt Scotch Whiskey
1 tot tea syrup*
2 tots fresh Granny Smith apple juice
Champagne
Lemonade
Add the scotch, tea syrup and apple juice to a fancy teacup and add an ice cube.  Top with equal amounts of champagne and lemonade and garnish with a slice of lemon.  This recipe can be multiplied in a punch bowl for a crowd.
*Tea syrup
I cup of hot strong brewed English Breakfast tea
I cup sugar
Stir the sugar into the tea until it has melted and refrigerate. 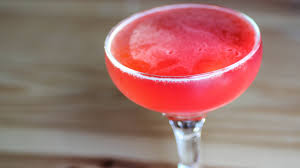 Gentledyke said this was one of her favourite whiskey cocktails so I got the recipe from her and am most definitely going to give it a try. I know from personal experience that she makes a mean cocktail! 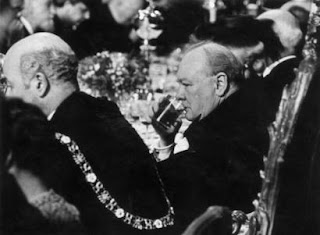 ‘You have enemies? Good. That means you have stood up for something, sometime in your life’ ~ Winston Leonard Churchill-Spencer
(30 November 1874 – 24 January 1965)