The Gospel, According to Me

The Bible has been a best seller for all time and, obviously, the authors of the book did not make any money from it whatsoever. So who profits from the sale of the book and who agreed to that contract? 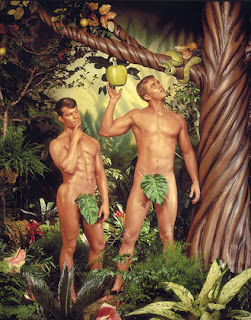 Well, the Bible is actually copyrighted and each company who owns that copyright makes money off it. In order to create a new copyright,  there must be substantial changes to the Bible - which means the Bible most Christians read today is not a true reflection of the original version. Which led me to wonder, which parts of the Bible have been changed and how did this impact on the first love story of all time in Genesis: the one between Adam and Steve?

I have frequently been told that it was just Adam and Eve and not Adam and Steve in the Garden of Eden, when religious freaks try to condemn homosexuals to hell. Well, how the fuck would they know? Were they there? Also, which re-written copy of the Bible are they reading?

I believe Adam and Eve were not alone in the Garden of Eden and that Steve was also there (you are welcome to prove me wrong). You know, to give Eve options. We all know how women are. The one thing that could not be foreseen was the fact that Adam and Steve would fall in love and that Eve would become their much begrudged beard. Was Steve God's back up plan for Eve? Who knows. Was it planned that Adam and Steve would be gay? I think not.

Eve felt cheated out of her deal in the Garden of Eden and, naturally,  developed some resentment. I mean, who wouldn't? She did not have a guy - or even the option of becoming a lesbian! Was this because she was not skinny enough, her boobs were too small,  or maybe she had the personality of a hedgehog? Who knows. But the fact that she was lonely, did not have a lover and possibly developed some body image issues is very plausible. For most people that would be depressing but not for Eve; she was a woman on a mission. So she got her shit together and made a plan. She would tempt Adam to commit the primordial sin: eating the forbidden fruit. Apparently she got this tip from a snake which is highly unlikely because, you know, snakes can't talk. Her plan was all her own and kinda genius when you think about it.

As most of you know, in the Garden of Eden there was an apple tree which God told his creations they may not eat from. Which is stupid because it's like putting a treat in front of a puppy and telling him he cannot eat it. They were kinda set up to fail, if you ask me. Adam had great willpower and listened to Steve, who was the responsible one in their relationship. There were a lot of fruits in the garden, including them, and there was no reason to develop an appetite for apples - even if an apple a day keeps the doctor away. Not that there was a doctor with them but you get what I'm saying. But Eve was a temptress and knew exactly what she was doing. You see,  she had a short term and long term plan for Adam, who was the butcher one, Steve being more on the fem side.

Her short term plan was to roofie Adam and make him eat the apple so that they can be thrown out of the garden, hence getting him away from Steve. The long term plan was to get Adam to fall in love with her. So that is exactly what she did. Adam ate the apple and fucked up his relationship with Steve. He got thrown out of the Garden of Eden leaving Steve all alone with his spring collection,  made of flowers and leaves,  who he now had nobody to model it for.  Eve was cruel but her plan succeeded and she soon found herself in a brokeback marriage. It was not ideal but it was what it was. What happened to Steve nobody knows. You see, the authors could only focus on one narrative because the people back then didn't like to read and papyrus leaves were very expensive.

In the later printed copy of the Bible the publishing companies decided to remove Steve and the dinosaurs from the narrative entirely and tweaked the original version. Poor Steve was written out of the Bible and hence he never got the credit for decorating the Garden of Eden or for styling Adam with the newest fashion and Haute Couture. Basically he got screwed and dissipated into obscurity.

When Leviticus was re-written, the author(s) was in all likelihood in a bad mood and probably terribly hungover. Frankly, that is the only reason why he would condemn 99% of the population to hell, including himself. Hangovers are major assholes - they will do that to you. There are too many sins in Leviticus to deal with, as it seems to be the most hateful chapter in the Bible. So if you haven't read it yet,  skip it - it will ruin your day and you will go to hell. Ignorance of the scripture is no excuse but hey, when you have to start making lists of sins it becomes very annoying.

I wonder what the original version of the Bible was like. I also wonder when people thought it was ok to go and make substantial changes to it. Fiction novels are not supposed to be re-written just because you don't like sections of it. You don't see people going and re-writing the classics in our literary history. So why would the oldest fiction novel in the world be changed and copyrighted? The only reason I can think of is that is that it is meant to be used for sinister purposes.

Too often people use the Bible to condemn others, to justify discrimination and, in the past, even rationalize racism. The Bible has been changed to fit certain people's and organizations' agendas. The book people are reading today is the byproduct of bigotry, politics, religious oppression and justification of hate. The people in 100 years from now will read a completely different Bible than the one we have today. Who knows, there might even be transgender aliens in it. Unfortunately, we will not be around to see it. For now we are stuck with the most judgmental book known to mankind. It is a poorly written fiction novel, the original of which is nowhere to be found. Not even on the internet. I am probably going to hell for having written this - that is if hell really exists!