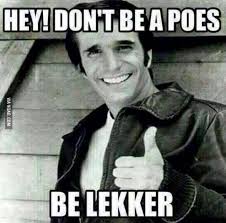 I’ve had quite a few run-ins with a disease over the last few years and it seems to be infecting a lot more people than I thought possible. It’s called ‘The Failure Disease’ and unfortunately it can’t be detected by a CAT scan and it has no physical symptoms for one to notice before you allow sufferers into your world. Common (excuse the pun) symptoms to watch out for are:

·         They are shameless spongers and no matter what you do for them or how much you help them out the point will be reached that it won’t be enough and unless you are giving them exactly the same lifestyle you have you’ll be the cunt in the story.
·         They won’t have a pot of their own to piss in but are more than happy to sit back and have others support their sorry asses yet they will also be the first in line to point out and/or make fun of somebody who is doing their best to make an honest living if said living is considered ‘beneath them’.
·         They seem to think they are so motherfucking special that the world owes them something just because of who they are.
·         They are ‘oh so superior’ on social media and often attack others when in reality they’re the kind of plebs who think Spur is fine dining.
·         They cannot for the life of them think for themselves and always need to be spoon fed when it comes to doing anything work-related and seem to forget that the only time spoon feeding doesn't irritate the bejaysus out of one is when you’re feeding a baby.
·         They cannot control their emotions; they will react like a teenager going through the worst part of puberty at the smallest thing. I’m talking tantrums, tears and mini-meltdowns and 5 minutes later it’s all smiles again. God gave you a mature brain. Use it.
·         They constantly brag about what they used to have and usually if you pay attention you will quickly notice that there are discrepancies, however tiny they may be. It’s very hard for liars to keep track of their lies and despite the fact that since brain op my short term memory is fucked (so fucked that Hubs calls me a fancy goldfish – a Fantail) it’s like a super power of mine to pick up on those little discrepancies, then I suddenly have the memory of an elephant.
·         Whenever they get confronted with something and they don’t have an answer they will cry, and I mean CRY - the kind of crying that involves floods of tears, sobbing and snot bubbles, usually on the shoulder of whomever confronted them. Then the poor person who had crocodile tears cried on them is left to deal with the drying streaks of snot that look like an army of snails attacked them while they weren’t looking.
·         Blaming others. Honestly, few things grate my tits as much as someone who enjoys playing ‘the blame game’, few things! You know the type, they are the ones who never own their shit and will always always find someone to pin things on, whether it be losing a job, fucking up a friendship or a business relationship or cheating on their partners; those motherfuckers will always find someone else to lay it on. 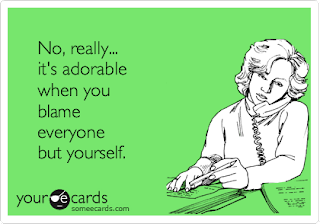 All of the above sometimes makes me want to move to whatever planet these people live on because there must be rainbow pooping unicorns that piss glitter there too. Most of us have lost everything at some point in our lives, some more than once, but the difference between winners and losers is how often you stand up again. There is no shame in being financially challenged but sitting on your ass and having a million stories about why you’ve got nothing, each and every one involving someone else? Damn right there is shame in that. A LOT! And seriously, if you’re going to spin a lot of bullshit, at least have the fucken decency to think up better stories, don’t treat people like they also have double digit IQ’s… mmmkaaaay?? 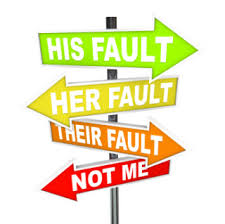 Behind my own curtain I’ve seen and/or experienced the following and I’m pretty sure a lot of you would recognize one or two of these examples:

Blame Game: "The branch failed because my boss wasn’t doing his job and I had to move back to Head Office when the branch closed and our whole lifestyle had to be thrown out the window, he’s such a cunt."
Reality: Branch was opened specifically for Blame Gamer (hereafter known as BG) to run but BG was so useless s/he couldn’t organize a piss up in a brewery so unsurprisingly branch failed.

Blame Game: "After company closed I was completely written off and abandoned in a different country by my boss. He’s such a doos."
Reality: BG was offered a job in new company but declined, stating they have been offered another opportunity. Said opportunity fell through so naturally BG would blame Boss for the fact that they had their dick out and nowhere to put it.

Blame Game: "Boss cut my salary and I stuck around for ages with nothing in return and he still expected my loyalty. He’s a real asshole."
Reality: Boss closed company and instead of retrenching everyone he gave employees the opportunity/choice to be part of new start-up, which would include a shareholding once company took off. BG seemed to think a new company would be an overnight success and didn’t realize it took cojones which s/he seriously lacked. Business isn’t for pussies people, that’s why there are only 500 people in the Fortune 500! It’s not called the Fortune 2 000 000.

Blame Game: "I fucked around because my spouse was a real killjoy, never letting me have my friends over and always wanting to know exactly where I was when I was out jolling. It’s their fault we got divorced, not mine. S/he’s such a bitch."
Reality: BG thought s/he could still go out partying every night once married without spouse knowing where they were or who they were with. BG also expected spouse to entertain friends until the early hours on week nights while they trashed the belongings paid for by spouse and treated said home like a student commune when spouse had to be up early in the morning to be at the job that supported BG’s lifestyle. Maybe next time BG will use a condom when having sex with a bloke so BG doesn’t get caught – dudes leave evidence behind! 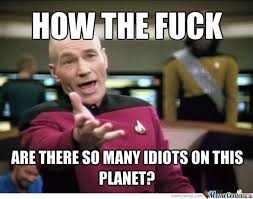 I ask myself two things at the end of each day; did I do something productive and did I conduct myself with integrity and honesty? None of us are perfect and we all fuck up, sometimes by accident and sometimes on purpose, but if you can constantly be disloyal and dishonest to your friends/co-workers/employers/employees /partners (whether in life or business) you are going to get exactly the life you deserve. You may think you’re clever and give yourself a little pat on the back every time you get away with it but people really aren’t stupid and at some point the day is going to come when their eyes open wide and they see you for exactly who you are and then you’ll be pretty fucked - sideways with a cactus, without KY. 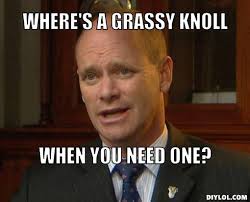 We don’t always feel super productive or creative but even if you just get a head start on that room or cupboard where you hide your shame (you know the one – it’s where things you hide that are messy just seem to get a life of their own and multiply like weird alien life forms) you already feel you’ve achieved something, however small it may have been. We also don’t always feel particularly super close to our friends/co-workers/employers/employees/partners but what the fuck is up with blatantly being able to sit there with a smile on your face while you’re either busy screwing them over or plotting how to screw them over? I’m sorry, I really don’t get that. Maybe my mask is full of cracks because I cannot maintain that kind of two-faced behavior for more than a day. I only ever manage that in an emergency and then I feel dirty. As much as I may hate it, that’s what life is about sometimes and I do have the cojones to do what needs to be done thankyouverymuch.  I don’t have time for weak minded people since I have come to realize how dangerous they can be. Sheeple cannot think for themselves and are very easily turned; sometimes it’s so obvious that when they speak you can actually see their puppeteer’s hand up their asses moving their mouths like a ventriloquists dummy (well waddaya know, another pun!) in your mind’s eye. To those puppeteers I say, good luck to you dude/ette. May the best wo/man win, just remember that true winners never start a battle but they always win the war. 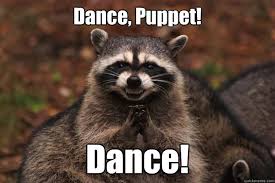 That’s it for now my Beauties, I think I’ve said enough to help you recognize those with ‘The Failure Disease’ and if I helped even one of you get rid of a succubus in your life my job here is done!