Seeing as I'm still on leave, I think I shall take you to one of my favourite places today...Fairyworld...no darling, it's not a new gay club in Pretoria...it's a place one can escape to in ones mind, where you can be and do what ever you please, far far away from the real world and who and what you really are. Fairyworld is a nice place to escape to every once in a while, but be careful, an extended stay there cannot possibly be healthy, and if you visit there too often, you may find yourself becoming a permanent resident there. Allow me to introduce you to some of the people that have decided to make Fairyworld their forever home:

It seems only fitting that we start our meet and greet with the Kween of Fairyworld... 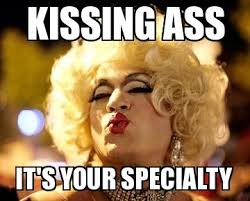 No one can quite remember when she arrived, just that she's never had any inclination to leave. She's earned her crown by building a media empire in her own mind and fancying herself as being the next Oprah because she interviews "celebrities". In the real world, the only "celebrities" she's ever interviewed, write for this blog, and hey, we did it for a laugh. Her so called interviews were published on a facebook group that she added unwilling members to, and the only people that seem to like it are the ten moffies who are waiting to read their own interviews or their mates interviews. Apparently, according to only herself of course, is that her "blog" was nominated for some award and that she received over 3000 votes. Voei tog...If there is an ounce of believability in that I wonder how many people fell for it, especially considering that all the 'votes' had to be sent to her own email address. Just chew on that one for a moment. She spends an exorbitant amount of time creating the smoke and mirrors, but then again, she doesn't have anything meaningful to do with her time. Truth be told, she hasn't been seen out in public in ages and that may well be because she can't find gainful employment in the real world, she's not very good looking, her choke chain is tied to mommy's apron strings and because she doesn't have very many friends in the real world. Bitch needs to get laid.Yet she still believes she runs an empire out of a mansion in Beverly hills (treinspoorhuisie on the wrong side of the east rand, with mommy of course) with her fan base of millions and in her spare time she acts as the official spokesperson of the entire LGBTI community, deciding who she can and cannot kick out of the treehouse for not playing by her rules. Ag shame...

It seems only fitting that we start our meet and greet with the undisputed messiah of Fairyworld, my very own personal nemesis, the dikgat dominee from Krugersdorp. This one fancies himself as a redeemer, an exorcist and bff of many troubled teens across the country. This one makes me laugh, a lot. According to him, having any sort of statues, figurine ornaments or tribal masks in your house is a sign of demonic possession, that only he can free you of, all gay people are going to hell unless you call upon him to cure you, and he can cure anything from alcoholism and addiction to life threatening illness and satanism with his blessings. I once took him on publicly, to which he then responded by sending me a private message to please remove my comments because it hurt his feelings. So whenever you have a porcelain poodle giving you the evil eye, pop in here for bbm pins, blessings and cheeseburgers! 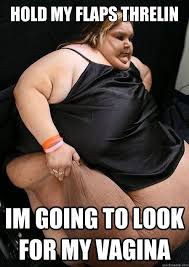 Next mansion to your left belongs to Geegee's speshul friend and stalkertroll. She's a birrova celebrity over here, but that's just because she doesn't fucking shut up, ever. In the real world, we have a saying, empty cans make the most noise, but here in Fairyworld, one's IQ, looks, financial situation and ability to count to ten doesn't matter at all. Over here, she's the belle of the ball, but in the real world she's just shaped like a ball. She seems to be under the impression that men fall over their feet for her, but in reality it's just another meth head, too high to take more than 3 steps on his own. Her mansion is also a tiny townhouse in the slums of Cape Town and what she calls being a lady of leisure in fact means giving hand jobs for airtime so she can cause kak on the interwebs from her 90's Nokia 5110.

Over to your right lives Fairyworld's very own tycoon and well respected wealthier than Donald Trump business man. Excuse his arrogance, his wealth and power seems to have gone to his head. Maybe that's why it appears to be bigger than his body. His businesses include a larger than life marketing and printing business, a restaurant worth millions and an up and coming underwear empire. He is also vegan, an animal activist and a fitness fanatic that drives a rare antique vehicle. In reality he doesn't have a pot to piss in or a window to throw it out of, is unemployed, homeless and not even his own family wants him. Also, the underwear empire consists of stickmen drawings. He also looks like that red thing with the fishnet stockings in the old Powerpuff girls cartoon. Plus I'm almost 99% convinced that he's vegan because he can't afford meat. No wonder he landed up here, he has nowhere else to go.

And the last house on the right is being leased on a very permanent basis by someone that has the very unique ability to not have her shit together both here and in reality. Her moodswings are so bad, that she even turns on herself from time to time, all the while playing the victim, where everyone is out to get her, everyone does her in, and she goes all out to make it seem like she just lies there and takes it. Truth be told, she only does that in the bedroom, when one of her many male and female suitors of all ages pop in for some leg-over. She is also notoriously house-bound and spends most of her days playing succubus using various chat apps and hookup sites on her tablet to lure in new victims, that is when she's not neglecting her spawn or driving her family into bankruptcy or looking for fights with her lodgers because of her many bad habits.

It seems like global prerequisites for acquiring property in Fairyworld is to be batshit crazy, to live out your days on virtual platforms (you know, where you can capslock people to death), and most importantly to play the victim at all times, especially when you are the one always looking for shit where there isn't any. When everybody hates you, nobody loves you and you want to eat some worms, then best call up your estate agent and secure a prime spot in social media (and your own mind's) most sought after property...

That's it for today. Fairyworld has many more unusual and colorful inhabitants, but that's another story for another time.