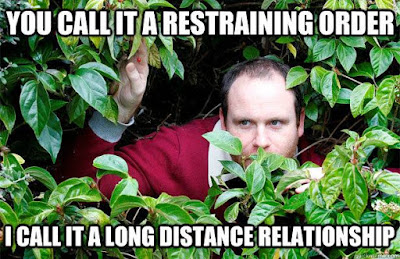 I seriously don’t understand people…I mean I should, considering that I spent the better part of 6 years getting a postgraduate degree on supposedly how the human mind works, but I just don’t. Maybe that’s part of the dissuasion that plummeted me onto another career path because I just don’t get people. Here’s why

Case 1: Someone close to me went through a birrova nasty breakup in October. Since then, her ex has gone full psycho…from sending up to 50 messages a day to her family, playing victim-victim with me, frantically trying to get her boss to contact him, harassing the people in her block of flats for information, trying to be buddy buddy with the people at her work, WhatsApping everyone that used to be on her contact list and even creating fake Facebook accounts so he can write nasty shit on her wall. What the fuck dude? Get over it, move on, hug a fluffy cat! Maybe if you weren’t a complete douchebag she wouldn’t have thrown your ass out, and proving that you are completely mental only proves that she made the right decision. Plus, if you’re gonna be that pathetic…why would she want you back?

Case 2 and 3 and 4: This is my own personal experience with girls who don’t quite have all their screws tightened. The first one of the was a girl I dated to spite another girl. Very mature of me, I know, but hey, I was only 23. Little did I know that this budding 20 year old was a bona fide bunny boiler in the making. Our “relationship” also didn’t end very maturely to say the least. I moved provinces, hooked up with another girl and left her ugly, creepy ass behind. In all honesty, her incessant staring at herself in the mirror and pouting while we were on the job freaked me out a little and the fact that I had to either be drunk or high off my face to touch her said enough. She then targeted my friends, trying to get her mates to beat them up at the local, trying to stir conversation with me on social media, she even went as far as to create a “I hate Lilly Lampshaded” group on facebook. I had to laugh at that one…then the middle-of-the-night breathy phone calls started, I was inundated with nude photos of her, I had people following me, and she made sure to go to places knowing I’d be there. Stalker 2 and 3 happened almost simultaneously. One was a married mother of one employee of mine, and the other the fiancée of a friend of a friend. Both of them supposedly straight. Try nekkid selfies for starters, forced and completely unwanted affection for mains and full blown emotional claptrap for dessert! Stalker three ended up in the psych ward because she “couldn’t handle the rejection” and had a breakdown. She blamed me for it and when her family and fiancé started asking questions, she turned the tables and told them I was the one who wouldn’t leave her alone. Luckily I had proof which I sent to her sister-in-law and even after that the “I will always love you” messages didn’t stop. Bitch, you ain't Whitney Houston, so stop! Stalker 2, with a lot of effort, eventually disappeared. And just so you know, things got so out of hand with stalkers 1 and 3, that I had to take out interdicts to make them leave me alone.

Case 5: GeeGee’s obnoxious stalkertroll! I have had a front row seat to the almost 5 years this particular brand of crazy has been going on. This vetgat has gone to every extreme known to man to prove to the entire internet precisely how pathetic she is and that she has no life. I asked GeeGee once why she hasn't taken out a restraining order considering that she has almost 200 screenshots as proof and she said it's because restraining orders are for pussies and besides, her anger has turned into pity. This particular gutterslut often flies into a booze- and drug-fueled rage and tries to take a swat at the people who have written her low class fat arse off and it must be way too much for her black stone heart to handle. I say 'heart' because she doesn’t have much of a brain and what she did have left she probably snorted away a very long time ago. In my professional opinion, I firmly believe that she is a closet dyke that has a massive girl crush and cannot stand the fact that the object of her rejection is happily married.  Also, by her own admission, she believes in not taming one’s bush…seriously, who wants that???

If someone doesn’t want you, leave them alone, get on with your life. Breakups happen, move the fuck on. There is nothing more pathetic than pining over someone that would rather put a campfire out with their face than look at yours! And why would you want to be around someone that feels that way anyway?

I think I’ve made my point.
Lilly