I never get involved in news, politics or anything like that because it always gives me hives but this whole Pastor Anderson thing had my blood boiling. The arrogance of this man, the hypocrisy, the blatant disregard for human life. I literally can't even. Yes, I said it. I can't even! Amongst other things this giant douche had the gall to call our beloved Archbishop Desmond Tutu 'perverted' and still thought he would be allowed a visa? How very delusional of him. So it was with absolute glee accompanied by a rather stupid happy dance that I saw social media blow up with the news that he was banned from visiting South Africa! A big fat shout out to all my friends in the LGBT community who were relentless in their quest to make sure this asshole never touched down on South African soil. You guys ROCK!

My friend Jaco Lourens from Jockstrap posted this picture below on his Facebook page with the following caption and I think it's rather fitting "Oh honey... if you feel the need to advertise your sexuality on a t-shirt, then I think you have something to hide #StevenAnderson ?!"

What a twunt he is... Shame, there must be so many dust bunnies in his closet by now I'm amazed dude can breathe hahahahaha Honestly, I have yet to meet someone so outspokenly homophobic who isn't a closet queen who's well acquainted with glory holes. 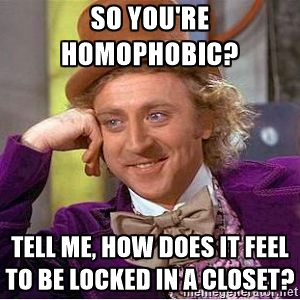 In all seriousness though... We've had problems in this country and awful heinous acts have been committed against the LGBT community. 'Corrective rape' where lesbians have been gang raped and tortured to death. Be-headings of drag queens. Gay bashing. Bullying of young gay people and their subsequent suicides. Just horrible things... So I'm really proud of our Government for banning this man who publicly calls for the execution of gay people. He's the epitome of evil at it's core in my opinion. I've spent more time than I should on Google looking up Pastor Asshole and I'm feeling sick at some of the things I saw that cannot be unseen. One thing I was happy to see is that fag hags are not welcome in his Church either. I would rather staple my eyelids to a table than spend 10 seconds with this psycho and his cult.  How this man, this lay preacher, has such a following literally boggles my brain. Is it all the fracking going on his his neck of the woods? Or generations of inbreeding? Did something heinous happen to him in his childhood to make him so filled with hate? Or has he just found a niche where he can take money from people who can't brain for themselves? I don't know what God he supposedly worships and apparently speaks for but it sure ain't mine. Reading about a lot of his rants I realised that there really is no reasoning with people like him. Whatever his motives may be, I highly doubt they're to save souls.

Then the Pastor decided he's going to take his soul gathering tour or whatever the fuck he called it to Botswana. Well, Botswana didn't take very long to boot him out of the country:
Homophobic US Pastor Steven Anderson arrested in Botswana

I Whatsapped my friend Terry Tiger Victor from Drag Queen Headquarters  and said "Quick, most epic gay anthem ever?" and without missing a beat or asking me why he replied with "I will survive". It's the perfect song in my opinion. Even though it's about a lost love the lyrics can be applied to other issues as well. Survival bebe! The attitude being you will never break us, we will always stand up and fight. And be FABULOUS and FIERCE!