Someone asked me the other day to repost this piece that I wrote a few years ago on my old blog because it apparently helped them to deal with something similar. So I thought why not? I found it very cathartic at the time. Sort of like taking control of my fear and anxiety about having another shotgun headache that will more than likely kill me... I don't know why PTSD counseling isn't offered to people who stare death in the face medically, it really does change one. At the time of my diagnosis I joined a couple of online forums because I thought it may help me but they only ended up making me even more anxious and paranoid so I unsubscribed. Since I wrote this my constant headache isn't constant anymore, I only have the odd episode when I have too much pressure building in my head and I have no more anxiety or fear, even though I have been avoiding my annual MRI which is now about 5 years overdue hahaha. One doesn't always have control over the shitty things that life throws your way but you DO have control over how you deal with it. I know this post may offend piss many people off but if it helps even one person then it's worth it. So, here goes... #tbt !

Dear Constant Headache,
We started doing this fucked up little dance almost 5 years ago and I ignored you for months. You obviously had no idea how good I am at sailing on that river called denial which is probably why you decided to drop me like a sack of shit when I was in the shower 4 years ago with that lovely shotgun headache. Fine, so I lay there like a drowned rat for ages until the cold water woke me up and I finally dragged my wet ass to my bed, popped 6 Myprodol’s and went on with my day. There was no way in hell I was going to be found with my nekkid ass out for all to see which is why you didn’t kill me, even though you were supposed to. When they found the tumour it finally explained why my constant companion Irene was around, especially when I was having a few toots and we could entertain ourselves for hours on end. She was a crazy bitch but I loved her. Irene, rest her soul, ended her days in a medical incinerator and I was left with a very sexy titanium plate to remind me that she existed.

When you didn’t manage to kill me outright, you did your best to make me have a melt-down by having me diagnosed while Hubs was away on a business trip to the UK. On the plus side, once I got over the shock I was quite relieved that I wasn’t losing my mind. For months I’d felt like the song ‘Crazy’ by Gnarls Barkley was playing softly in the background while I went about my day. Waking up spooning my Doberman in his bed with no idea how I got there, going shopping and coming home empty handed having left all the packages gawd only knows where, driving over my own handbag and freaking out when someone picked it up and followed me to return it... the list goes on and on. People thought I was mad when I insisted on getting completely plastered with a few close friends before I went to hospital, but the way I saw it I was about to iron my wings and wanted to have one for the road. What a party that was!! We had so many liquid cocaine shooters our pee was blue for 2 days... 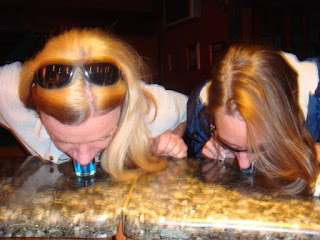 It’s also the only time I wore all my diamond and sapphire jewellery that I still haven’t been at a fancy enough occasion to wear. So I was wearing jeans and a hoodie at the time, so fucken what. Can’t see anything wrong with that... Was I supposed to curl up in a little ball and have a pity party? Sorry!! That’s not in my nature... Hell, I even got annoyed at other people feeling sorry for me. If I’m going to buy the farm I’m going to do it with grace and I’ll be fucked if my son remembers me as a wet snivelling snot nosed heap of fear. The hardest part was being wheeled into that elevator to surgery like a lamb to slaughter and being convinced it’s the last time I’d be laying eyes on my boys. I felt like my heart was being ripped into pieces but there was no way in hell I was going to show it and I gave my husband and son a smile because that’s how I wanted them to remember me. Nobody was more surprised than I was when I woke up in ICU – even the doctor couldn’t believe that I came out of a medically induced coma but I did. Because I was being bed-bathed. With a cake of Lux soap! And one of those blue disposable kitchen cloths... ‘Nuff said! 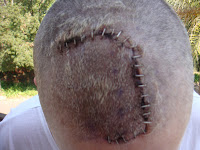 The Bride of Frankenstein

Ok, so I survived and I don’t think you liked that very much so you decided to make me a codeine addict. Almost 9 months sitting on the sofa looking like a drooling Bride of Frankenstein with my shaved head and another 2 years of being lost in a lovely bubble of prescription drugs. You knew I wouldn’t go to rehab but you didn’t count on me going cold turkey, did you? 4 months of wanting to crawl out of my own skin but I made it. Then 3 months ago you woke me up in the middle of the night and I thought the time had finally come, the Grim Reaper was in town. What worried me the most was that I had Bridget Jones comfy knickers on (what? who sleeps in a bloody g-string??) and I hadn’t had a wax or a pedicure. Death? Nah, not so much. 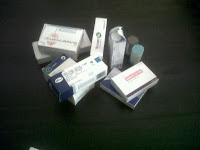 Breakfast, Lunch and Supper of Champions...

I’ve bumped my head so many times you can serve soup in the dent it’s created but what’s a spaz like me to do? Walk around with a helmet on all day? My neurosurgeon said I’m never allowed to do contact sports again and the look on his face when I asked him if rough sex counts was priceless! I couldn’t resist, the poor man... Serves him right really – I mean, do I look like the type of person who does Sport?? Oh, and that fugly snow hat I have to wear in bed in the winter to keep my plate from giving me brain freeze? I’ve learnt to ROCK it you motherfucker! As far as the titanium plate itself is concerned, it's become a party trick with my son's metal detector, always good for a giggle to hear the 'shoowoong' sound it makes when we're pissed! 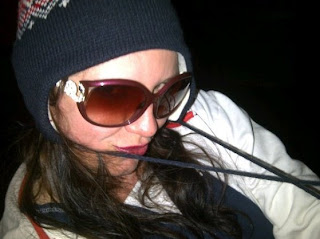 I know the ‘kill shot’ can come any day, any time BUT I’ve made my peace, so do your worst... Just make sure it’s fast. I’m NOT going back for more surgery. NEVER again. That’s why I’m almost a year overdue on my annual MRI, I mean what’s the point? I already got rid of everything I don’t want people to find when I’m dead, I’ve planned my memorial (my boys know who’s banned and that the pyramid of shot glasses on top of my ashes better reach the Rabbit Hole ceiling), I’ve learnt what’s important in life and I’m content. 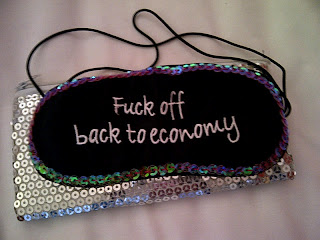 What every Diva needs in hospital

You’ve taught me a lot Constant Headache, and I thank you for it. I know the ‘pain scale’ better than I should. A constant 3 out of 10? Bitch puuuhleeze! Is that all you got? After experiencing the loveliness called bleeding on the brain that’s nothing! You taught me that I’m tough, that I can feel like I’m bleeding from my eyeballs and still won’t give up but most importantly – you’ve put a built-in blood pressure monitor in my head which has helped me get rid of the dead weight in my life. The assholes that drained me and never gave anything back, not even loyalty, and even though it’s been hard it’s been worth it! A lot of people think I’ve become a complete bitch from hell but I couldn’t give a flying fuck through a rolling doughnut to be honest. If I’m going to die tonight or tomorrow I’m sure as hell not wasting any more time on fucktards and users. So what if I happen to be related to some of them? I’ll explain myself when I get to the pearly gates. If I go downstairs instead? They better have vodka there... and Drag Queens... and poker games, that’s all I’m saying.... And you know what? Irene might have gone up in a ball of flames but GeeGee was born out of the ashes like a motherfucking Phoenix and she’s growing on me.

So fuck you Dear Constant Headache. You're not getting the better of me, no matter how hard you try. I'm done with pills and I'm done with you.

And when you're out there
Without care,
Yeah, I was out of touch
But it wasn't because I didn't know enough
I just knew too much

And I hope that you are having the time of your life
But think twice, that's my only advice