Not quite Kim Kardashians ass

I've written about Hubs before when I was a columnist for the Modern L and back then what sparked the post was all the shockhorror messages I received from readers about a certain picture of us I posted in the #throwbackthursday section. Being as obstreperous as I am obviously I posted it as a profile picture on my Facebook recently. Obviously. 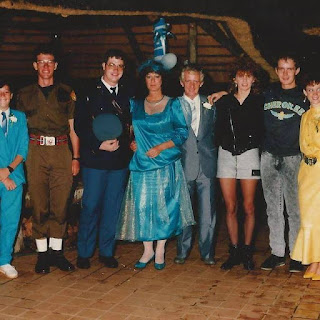 This time I got a few inboxes from fb 'friends' who thought they had the 'right' to tell me off about our lack of respect. Jaysuswept, I can't even. The blatant cheek of that blows my mind. I'm undecided if it's stupidity or arrogance that gives strangers the impression that it's ok to be so fucking judgmental and preachy so maybe it's a combination of the two. I'm not writing this because I give a fuck about what people think but because I love this story so much I can tell it 2000 times and enjoy it every time. With relish and glee! It may not have broken the internet like Kim Kardashian's ass but there has been a shitload of lashback, and I love it! So here goes...

Hubs and I got married in 1988 and fought tooth and nail to get permission. I was 16 and he was 19 so I guess we were rather fortunate to get away with it but when it comes to me, I can ‘outstubborn’ a donkey. I blatantly refused to attend school and announced that they may as well sign the papers so that I could get a job and become a contributing member of society. Many family members thought it was a shotgun wedding and I’m happy to say we disappointed the hell out of the gossipmongers when our son only came along in 1990. One family member didn’t attend because “they don’t waste time going to weddings of marriages that won’t last” (#inyourface #fuckyouverymuch #28yearslater). The reason we got married was because Hubs was doing his National Service at the time and his army pay would double (from R200 to R400 a month lololol) and the added bonus was that I would be emancipated from my parents. On our wedding day my father-in-law brought the woman who was the cause of his marriage disintegrating along and it completely spoiled the day for my late mother-in-law – it was her only son’s wedding day and what was meant to be a special day was completely ruined for her. We were furious at the cheek and blatant disrespect, especially considering the fact that they weren’t divorced yet and we vowed to get revenge for the humiliation my mother-in-law suffered by her husband parading his mistress in all our faces. At least everyone could see just how common the she-devil was when she put a cigarette out in her cake. Oh, and our wedding gift from them and the only contribution my father-in-law made towards the wedding? A miniature bottle of J.C. Le Roux sparkling wine with 2 champagne glasses which was a corporate gift from the company she worked for. Luckily for them we were so tired and hungover from the night before that we both almost passed out in the church while the minister was rambling on so we didn’t have the energy to start a fight.

3 days after we were married Hubs was dispatched to Oshakati on the Angolan border to do his ‘job’ in the Special Forces (fuck me, he was sex on legs in that uniform!) and our only contact was via letters and the odd phone call. Flash forward about 8 months and father-in-law and the she-devil announce they are getting married. I wasn't invited and Hubs would have been perfectly fine not attending but father-in-law went to great lengths to arrange a special pass for Hubs so he had no choice, not that I was complaining about finally seeing him again and getting my much needed dose of man! A HUGE deal was made out of the impending nuptials; dresses and suits were tailor-made, the church was decorated to the nines with great big floral arrangements, a limo bedecked in miles of ribbon was hired to take the blushing bride to the church… Such a fat broo-ha-ha that there were relatives and friends flying in from all across the globe… You get the picture. Maybe it's just me but how very fucking pathetic, ridiculous, laughable...

Hubs told me that I had better come with him, especially since I was his wife now and who was I to refuse? Noddafuck were we going to waste money better spent on a good jol (or several) on an evening dress and a suit so Hubs and I decided to wear the kind of clothes we were usually seen in at our favourite haunts at the time; Jacqueline’s Discotheque, Nightshift, Pig & Whistle and Club Equusite (a local gay club we would frequent, which may explain the gay rumours that were flying around back then). The family all congregated at their house first and watching the wedding video afterwards it gave us much pleasure to see the bride spotting us on her way to the limo, she went pale and shouted “Oh my GOD!” We couldn’t hear the rest because the cameraman had panned to what she was looking at and it was me getting out of our car.

We took our sweet time getting to the church and waited until we saw the bridal limo pull up outside before we went in. The church was packed to the rafters with wedding guests and we sauntered down the aisle as slowly as we could while adding a bit of a strut to our walk, right up to the front pew - just to make extra sure everyone got a very good look at us. When the wedding march started and the she-devil came down the aisle with her bridal flotilla in tow the gasps and whispers were still echoing through the church. REEE-SULT! There is also not a single picture with us in it that she doesn’t have a thunderous look on her face *cackle* At some point during the evenings’ reception Hubs’ favourite aunt who had flown in from the USA reached up and grabbed him by the collar from her tiny height of 4ft5 and raged “How DARE you disrespect your father like this?” Instead of bursting her bubble by telling her exactly why, we decided our point had been more than made and we headed off to one of our haunts which I mentioned above and partied until the sun came up. Hell, we didn’t even have to go home and change! We reminisced about it again the other day and decided that in retrospect we are not sorry; in fact, we would do it again, without a doubt! Hubs also pointed out that the balloons behind the she-devil's head look very much like a giant blue dildo. Quite fitting really, especially considering what a giant twunt she was.

We are very used to being gossiped about and often have a good chuckle about the incredibly imaginative and highly entertaining stories that invariably filter back to us and if we ever gave a damn about what other people think or choose to believe we would hardly have a moment’s peace, so we don’t. It never ceases to amaze me though that people tend to jump on a bandwagon without knowing the truth behind things, which is why I cleared this particular little issue up. That and the fact that it’s one of my favourite stories, hands down! When my late mother-in-law heard about what we had done she was thrilled, especially at knowing how her son and his wife had stood up for her, albeit in a very passive aggressive way. She never got enough of asking us to describe it all in detail hehehe

Hubs dedicated this song to me years ago and I can't think of a better song to end this post off with.